Under The Hood of FREE! 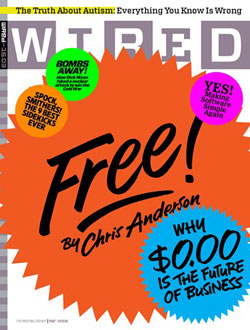 Welcome to the third part of my look at the world of “FREE!” as proposed and pushed by a few pundits and online bloggers as the future of stuff. I am particularly focused on Chris Anderson’s new book “FREE!”, because it is leading the charge of misinformation, similar to his book The Long Tail.

Chris Anderson has the admirable position of having a sort of bully pulpit to work from. As the Editor of Wired magazine, he has been in the position to decide and report on what is wired, tired, and expired. He has also used the magazine as a place to float the first chapter of his book about free. The funny part is that this article is already more than a year old, which is an incredibly long time in the internet world. It is interesting to see how his suggested business models have worked out, and how they show that Anderson may be nothing more than a tourist taking a snapshot, not really understanding what all is going on under the hood.

His first free model is “Freemium”, that is where there is a free product and an upgraded, premium version for a price. This is one of the areas where Free doesn’t go far past traditional marketing methods, from the sample of soap to the bite size sample in the supermarket. However, the model has it’s problems, specifically that the free they are often giving away isn’t a restricted enough product to truly promote the premium product. He uses Flickr as an example, with their free model and “flickr Pro” setup. The problem is that Flickr in and of itself as a free service is good enough for almost everyone who uses it. While the pro options might have some interested additional features, the base product is a fully functional system. There is realistically very little on the table to encourage people to move to the pro product. Sample systems should be about encouraging users to move to the pay product, not satisfy their needs for free.

The second item is “Advertising”. You know, like the google ads on this site, banner ads, etc. This is all and well, Anderson has been editing a magazine that is entirely dependant on the ad model to make it go. Broadcast TV is another traditional ad supported model, and they tend to work. Yet, in the economic downturn, magazines and newspapers have seen significant downturns in ad revenue, and Anderson’s own magazine has lost more than 50% of it’s ad pages in less than a year (and has ended up a much slimmer monthly edition). While ad supported is a model most of us clearly understand, the market of “FREE!” really kicks at it and makes it difficult to use. Movies are some of the biggest advertisers on broadcast TVs and newspapers, but if movies are being pirated more often and sales decline, the ad dollars available to promote the movie drops as well. So many online sites which run advertising and give away significant amounts of product (especially torrent sites that encourage file trading and other forms of “infringement”) are shooting themselves in the foot by taking away the exact revenue stream they are trying to cash in on. Ad supported in the end requires that people buy something or do something that is of value to the advertisers. If you take away the public’s desire to do those things, then your ad sales disappear.

Next is “Cross-subsidies” – this thing is free, provided you do that. Typically we would see this in cheap cell phones, expensive monthly plans, the old razor and razorblade mentality. Anderson uses the example of WalMart running DVDs below their cost as a loss leader, knowing full well that you are likely to buy other more profitable stuff while you are in the store. This is an example though that proves that free doesn’t really work out, because the item is rarely free. $0 phones are often very out of date phone models, Wal-Mart isn’t giving away DVDs for free because there isn’t enough upside elsewhere to support it. This is actually a good indication that free just doesn’t apply here very much at all. Anderson stretches this example (to the limits) in mentioning the most popular “FREE!” supporter model, the free music, expensive concert ticket model. Basically, they attempt to say that by giving music away (or in Anderson example the band gives the masters to street vendors who can see the music and keep all the money), the band in theory makes tons of money on fuller concert venues. This model is very dangerous, because it leads down a finacial dark alley, let me explain:

One of the problems of this model is that a certain point, the bands involved cannot perform more concerts (there are only so many hours and so many days in a week) and there are only so many places they can play. There is a point where they can not longer easily grow the size of the concerts, so in order to increase income, the only choice is to raise ticket prices. Already for top acts, it isn’t unusual to see tickets selling in the $200-$500 range per seat. These higher prices are at least in part as a result of the artist (and mangement) looking to make up the income lost due to declining music sales.

Further, it creates a simple problem, where tickets are no longer priced where an average fan can afford to enjoy the band’s concerts. Wealth is not spread evenly in society, rather the vast majority of the wealth is concentrated in a very small group of people, with more people in each level as you drop down. The vast majority of potential fans may not have enough income to attend the shows. The well off people pay for the overprices concert tickets, and subsidize the lower income people. Another way to look at it is the rapid fan who will pay anything to see the band, pays for the big dollar front row tickets, and in the end pays for a number of casual and non-fans to get the music for free.

You end up with a model where very few people are paying to entertain the masses. If some of those affluent people decide not to support a bad (by not attending over priced shows) then they have too signficant a control over what would be considered popular. In the end, is it fair to collect $100 from one person and give out 99 free songs, or would it be better to collect $1 from each of them and sell some of them $20 concert tickets too?

The final item I will touch today is “Zero marginal cost”. This is perhaps the biggest lie of the “FREE!” movement, because it trivializes and ignores the costs associated with creating content. Example is music, which takes time, effort, and skill to create, often recorded in studios, or on home cmputers, edited by someone, polished, packages, and made ready for the public. All of those steps cost money, time, and effort, typical full length CD album takes between 1 and 3 years for a band to create, between the writing process, the recording, the finishing, and the preparing for distribution. So while the costs for distribution of the music (digitally) may be lower than the “shiny plastic disc” model, the bigger end of the costs are still there. This is where the Long Lie comes back to haunt Anderson again – marginal cost is never zero, but often those costs are hidden from the public. Costs of internet connections, computers, bandwidth, servers, and all those other things required to make the “virtual” downloads happen are still there, just not charged directly. While the number is often very small per unit (if you push enough units), it never reaches zero. That space above zero is a big enough market for the Long Tail, yet is something to ignore when dealing with “FREE!”.

Also, marginal costs on music cannot be calculated directly on the cost of adding one more unit of distribution, because the initial unit cost (for the 1st disc) is incredibly high. So if it cost $100,000 to produce a CD, and it costs you only 1 cent per unit total margin costs to distribute it, the actual per unit cost never actually reaches 1 cent, it is always above that cost due to the cost of creation. Sell 100,000 copies, and each copy cost you $1.01. Give it away for free and distribute 1 million free downloads, and each one still cost you 10 cents to do. Notice there is no free lunch.

So looking only at the margin costs of distribution and declaring a product free can only be done by people who aren’t paying to create the product to start with. Many of them point to the cross subsidies model as “this is where you make the money back”, which would be good if the example band wasn’t already performing concerts and wasn’t already making money from them. Further, the process removes the incentive to create new and interesting music, rather it encourages estalished acts to sit on their catalog and just tour, not taking the time to create new music because there isn’t any money in doing that.

Anderson makes the mistake of looking at the exceptional profitable ad supported websites, the exceptional free music artists, and the exception freemium purveyors and tries to claim it should apply widely. Exceptions tend to prove the rules, there is no such thing as a free lunch. Under all the “FREE!” there is cost, and without income, there is no functional business model and in the long run no business. Sites like Twitter and YouTube are massively popular with the public, and yet Twitter has made no move to try to make money on their product (venture money keeps them in the game), and You Tube losses have been reported to be in the neighborhood 1 million dollars a day (supported only by the bigger business of Google). All the free in the world gets you a crowd, but not always business.