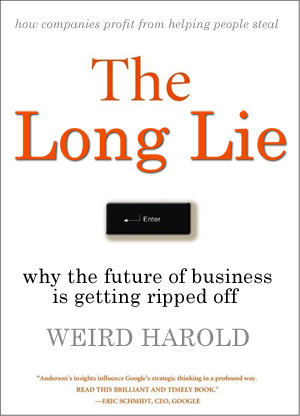 A few years ago, Chris Anderson, the editor in chief of Wired Magazine wrote a book called “The Long Tail”. In a nutshell, Anderson’s observations were based mostly around the book, video, and music business. With companies such as Amazon being able to stock a significantly larger collection of books than your local bookstore, example, they have created a market for older material. While it doesn’t sell as well as the new releases, most books / movies / music tend to continue to sell for a long time in the future. He called those back catalog sales “the long tail”, thus the name of his book.

But as with many pop culture writers, Chris Anderson made a few mistakes and a few broad assumptions in his book that in the end just don’t hold up. The Long Tail assumes that there is always some demand for almost any produced entertainment product, no matter how old it gets. But he failed to address the simple issue that during the late 90s and early 21st century, the western world became awash in “new” old product. TV shows were turned into box sets, the internet spread the word of old, out of date books, etc. In simple terms, there was a certain amount of pent up demand, a cross section of the population that would want to own the complete set of Hello Larry episodes has pretty much been satiated.

Quite simply, Anderson confused the pent up demand that lack of availablity created with a trend for things to sell forever. As that generation that remembers the A-Team and Sanford and Son either buy the DVDs or die off, the demand dies off as well. The long tail isn’t infinite, nor is it likely as pronounced as Anderson would suggest, because the data he looked at during that period was skewed by the pent up demand for this product. In many ways, it shows Anderson not as the grand discoverer of a great new thing, so much as a chronicler of current circumtance, attempting to stretch a fleeting observation into a long term trend. 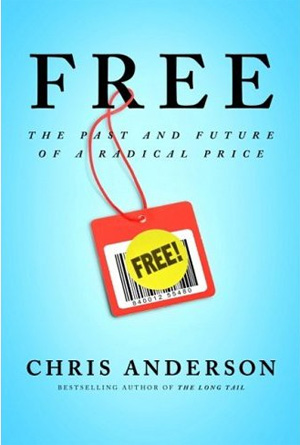 Anderson’s new book and new mantra is “FREE!”. Called the “past and future of a radical price”, it is another attempt to take a fleeting observation and turn it into a trend, and in turn to improve Anderson’s brand as a tech guru. it would be a laughable concept, except that Anderson is so serious about it.

The idea? Well, part of it is as old as the hills: Give away a sample for free, and use that sample to upsell people to the full product. Samples have been a huge part of marketing for literally hundreds of years, something that isn’t going away any time soon. The difference here is that the “FREE!” movement suggests that you take a product with existing value (example music) and give it all away free as a method to sell something else of more value at a higher price. In the music world, the suggestion is give away the music, and sell more and higher priced concert tickets. The idea is predicated on the concept that music can be distributed at no cost on the internet, so why sell it? After all, if people like your music, they will buy your concert tickets, right? With enough demand, you can raise the price of those concert tickets and make more money, or you can do more concerts and make more money, right?

Where the “fleeting observation” part comes from is that Anderson appears to be mistaking the widespread use of torrents to make infringing copies (aka steal, take without paying, pirating) of music as a business model, and one that should be embraced. It’s akin to the public transit companies seeing more and more people jumping the turnstiles, and instead of stopping them, they install mini-trampolines and ladders to help them get over those pesky ticket machines. It is the virtual version of throwing up your hands and allowing a rioting mob to invade your store and destroy it.

“wait!” they say. “People aren’t stealing anything, they are only making copies! That isn’t like ransacking a store”. This stands between a little while lie and a huge fib, depending on who you ask. While it is true that you will still have the original CD, what widescale “infringing” of the music does is steal the value out of the original product. While each copy isn’t specifically a lost sale, it is lost potential. With enough lost potential, sales will be lost and as a result value disappears. Just ask U2, with their recent album widely pirated over the internet after an accidental pre-release, the sales of that album were up to 50% lower than their previous record in the first week.

There is the rub. A band like U2 can’t do more concert dates in a year (not easily, anyway), and with ticket prices for top acts often hitting the hundreds of dollars, there is little upside on the sale of tickets. The record industry represents (by 2007 number) a 10 billion dollar a year industry. The idea is to toss that business out the window and turn it free. Where will the money be made?

Check back next time for how the Long Tail and Free come together to make the Long Lie.