The Lie Of Free Continues 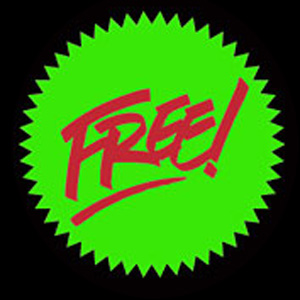 If you believe the buzz, if you are foolish enough to fall for the gurus, then you probably think that “FREE!” is the next best thing in marketing. As I mentioned last time out, Chris Anderson of Wired is coming out with a new book about “FREE!”, which oddly has been very slow to come out and more oddly will be sold and not given away. The first exerts from the book were published in Anderson’s Wired magazine more than year ago, which with lead time means that the content was ready more than 18 months ago.

Why the long wait?

Well, Chris Anderson isn’t anything if he isn’t a man good at timing things. As I mentioned previously, Anderson is well known for his book The Long Tail, published at the height of the great back catalog releases from the movie and TV companies. His basic theory held water only because of timing. Released when the data matched the premise, it solidified his guru status. At the helm of Wired Magazine, he has done the same thing, with so much muck thrown at the wall that he is going to have enough places where he is right to look like a true prognosticator of great skill, rather that a guy who tries to jump in front of a parade and look like it’s leader.

You sort of know the whole “FREE!” thing is getting convoluted when you read this first chapter (as published in Wired). Anderson starts out looking at King Gillette (he of men’s razor fame) who developed the great business model of “cheap or free handles, charge for the blades” which is a model still in use today. The point Anderson tries to make is that by giving away the handles, he developed a great blade business. While this is true, it also required a couple of other important points to make it work out. Foremost is having a tied product. The handle is useless without blades. A million free handles does nothing, nothing is accomplished with just a handle. The handle is custom and accepts only your blades. So all the free handles in the world will not shave a man’s face, will not accomplish anything.

Anderson goes on to cite examples: “Give away the cell phone, sell the monthly plan; make the videogame console cheap and sell expensive games; install fancy coffeemakers in offices at no charge so you can sell managers expensive coffee sachets.” In each of these cases, there is a tied and required sale. A cell phone without service is useless (except as a paper weight), a videogame console without games is nothing, and a coffeemaker without coffee is a nice way to make hot water. In all of those cases, there is no completion of task, no satiation of a marketplace. There is creation of additional demand, not a pure giveaway.

The discussion moves to the internet: “In economics, the parallel is this: If the unitary cost of technology (“per megabyte” or “per megabit per second” or “per thousand floating-point operations per second”) is halving every 18 months, when does it come close enough to zero to say that you’ve arrived and can safely round down to nothing? The answer: almost always sooner than you think.” Again, a totally misleading discussion where Anderson attempts to quickly dismiss the costs of operating a website, distributing material of the net, and so on. What is truly funny is that when you pair this against his Long Tail theory, you start to see where it turns into the long lie instead.

Basically, costs of bandwidth and computer equipment has dropped rapidly, but will soon reach a point where the human and physical costs of providing it are key components, rather than the actual equipment to provide it. A good quadcore server might cost a couple of thousand dollars now, the bandwidth to run it maybe ten thousand a year, which is very low considering what costs were not 10 years ago. However, the cost of the person to maintain the equipment, the monitoring, the support, and all that stuff which is dependant on people, not machines, continues to cost. Even if the machines and the bandwidth were free, the costs to keep things online would still be there.

What Anderson is doing is looking at the steep part of a log scale curve, and assuming (incorrectly) that it will continue to fall in the same manner forever until it effectively hits zero. Yet, when it comes to selling books and videos, he says that same sort of curve NEVER hits zero. Is the glass half full or half empty? It all depends which “guru” theory you are trying to push this week.

One of the funniest things is how Anderson is pushing ad supported as one of the business models. This is a section of the book that will likely be quickly re-written because the current economic downturn has proven Anderson wrong. In fact, his own Wired Magazine (which is mostly ad supported), has lost more than 50% of it’s ad space, and has gone from a fat, double thickness magazine to a thin, lean, and almost empty wasteland in less than a year. The owner / publisher Conde Nast has already shut down other publications in their group because of a lack of advertising. How long before Wired goes down the same road?

It brings the simple point: If Anderson could be so wrong about the basics of his own business (magazines), how can we take his “Guru” statements seriously?

Next time out, I will look at each of the areas of “freeconomics” that Anderson pushes, and expose the realities behind them.