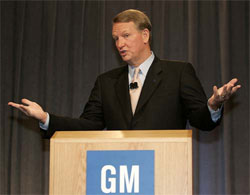 In the almost never ending saga of the embattled US auto makers, there have been a few odd twist and turns. This is probably the oddest one so far. According to the Associated Press, the Whitehouse has requested that GM CEO Rick Wagoner step down immediately, likely as a condition of an aid package that President Obama is set to reveal in the next few days. The sources is attributed as an Administration official, but is not named because not everything is public at this point.

This brings the month of March to an end for GM, which started the month suggesting that GM may not be viable anymore. This move to toss Wagoner out the door may be a move for the Obama administration to get a much firmer hand on the wheel at GM. The story says “A person familiar with Obama’s plans said last week they would go deeper than what the Bush administration demanded when it approved the initial loans last year.”.

It brings the questions: What happens next? Is this going to accelerate the shutting down of brands like Saturn and Hummer? Will Obama install a more friendly face to run the company? Read the story here, and see what you think.