Piracy and Censorship and Free Speech 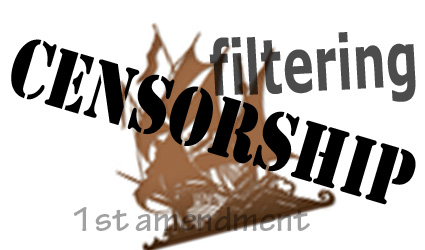 It’s been an interesting period in the piracy world in the last 12 months or so. From the shut down of Mega (just over a year ago) to the latest announcement by the Spanish govenrment that they are considering making piracy illegal, the shocks to the worldwide piracy underground have been massive. On the discussion boards, bulletin boards, and in on the anti-copyright blogs, the messages have gotten more and more strident, as more and more of the safe positions have been knocked down.

One of the interesting things in the process is that the anti-copyright types have been very careful to adopt certain words and certain positions as their safe hiding holes. Kim Dotcom, one of the most outspoken ones on the subject, has continued to base his whole defense on various forms of free speech and such. Yet, it appears that much more of his defense is a love of a lavish lifestyle that he can obtain in this manner, rather than the great moral stand.

In the same manner, many of the pirate sites out there are run by people who aren’t in it for any great cause, they are in it for the money. They plaster their sites with ads, popups, misdirecting links that say “download now” but actually take you to pay services, and so on. All of this is about making money, and not about free speech, censorship, or any of the like.

A friend of mine, someone I have known for (I hate to admit) 35 years recently “liked” a post on Facebook that sort of made me snort. In a post against data caps on internet services (you know, where you get a monthly bandwidth allowance rather than an endless supply) in support of Don’t Cap That, he wrote: “Data caps will change the time-honored internet principle of “All data are equal” to a new one: “Data associated with money are the important data.” With data caps it will be harder for me to get access to alternative points of view such as videos from scientific or cultural mavericks.”. His words basically say that without an infinite connection, he somehow is denied his “rights” to access this information. Yet, I remember growing up with a library card that only allowed me a certain number of books out at a time, and I didn’t feel that I lost any “views” because I had to wait a day or two to finish one book in order to go back to trade it for another one. The unwritten part of his argument (and those from the Don’t Cap That group) is that any limits on the internet amounts to a form of censorship or obstruction to their getting a point of view out.

Update in 2017, we are in the middle to end of the net neutrality debate at this point. The Don’t Cap That group is long gone, it seems!

We are in the middle of a digital revolution that allows anyone (including your humble author here) to spout off about almost anything. I rent a server, I write my stories, and you guys read them. It is no different than the printing press, or the mimeograph, or the photocopier. In all of those cases, your distribution was limited by your ability to pay for the materials for distribution. At each step, the costs to transmit your written message got smaller and smaller, especially if what you had went on a single page (tract, if you like). I can send out a million pages here for about what it would cost to typeset a single page and print a few hundred copies.

Yet, there is always cost. There is the cost to publish, and their is the cost to receive. To get mail you need a mailbox, and you must maintain it or you get no mail. If you want to pick up leaflets on the street corner, you must spend the time and effort to be at the street corner at the right time to get them. There is no requirement for someone to be on duty 24 hours a day handing things out to meet your needs. There is no “right” to assure that you get a copy either.

It is also important to realize that, even with all the digital technology, the rights of authors and creators are not diminished. In fact, the need for good authors (I am not one, I admit) and good creators (I am not that either) is even so much more pressing. While everyone can join the digital revolution, it doesn’t mean all things are equal. Give me a collection of power tools, hand tools, and material and you will end up with blood all over the place and something nobody wants. Give the same to a craftsman, and you end up with furniture, a car… whatever. The widespread availability of the tools doesn’t mean that we can all just do it. Heck, my writing style here should convince you of that.

Disrespecting the rights of authors and creators in the name of free speech is self-defeating. When you discourage the best from doing something, we as a whole lose out. One of the big arguments made by the anti-copyright types is that with the internet, we are producing “more content” than ever. This is true, but in the same manner that if you double the number of monkeys in a cage and deliver 10 times as many bananas, that you will get more monkey shit. That isn’t what we really want. Most of the content created seems to be crappy posts on facebook and girls posting duck face pictures of themselves in their underwear. Again, my blog qualifies as “content”, and even I think it’s just background noise. I wouldn’t trade away a single hollywood movie for a million blogs like mine. It’s just not a fair trade.

Free Speech is not unlimited, it’s a basic fact. Trying to support piracy in the name of free speech or against “censorship” is just plain wrong.