Report: Castor Semenya is a Both 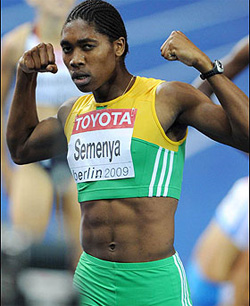 Well, this is certainly one for the “should have been obvious” file. South African “female” running star Caster Semenya has apparently tested as a Hermaphrodite, which is to say that she really isn’t a she, but more of a both. Accord to the report in The Sun (UK), the runner has no internal woman’s parts (ovaries, womb, etc) and has internalized testicles. Her outward genitalia is female, but everything else appears to be male. Her testosterone levels are three times the normal for a woman, due to the testes. Effectively, the runner is a man with a vagina, from what the report suggests.

The report has yet to be released officially, likely in part because of the issues this may cause on South Africa, where the runner has been treated as a star, and the public generally thinks the entire testing deal is a way for the Europeans to strip a medal from the South African. It is likely when the report is released that the runner’s career will be over.

More on this story here.