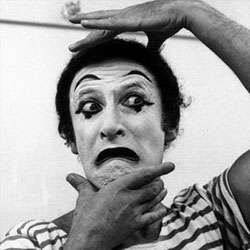 Marcel Marceau was quite possibly the most famous man that most of us never heard speak.  Marceau single handedly returned the art of mime and pantomime to the forefront of entertainment in his 50 year career.  He appeared in many movies, but was best known for his stage performances, often portraying a number of characters alone.  His main character was a lovable and innocent character called Blip, who was always amazed by the (invisible) things that he found in his world.

Unlike some performers who stop physical comedy as they get older, Marceau continues to perform well into his 80s, bringing joy to many, many people.  His unique performing style has inspired many, including Michael Jackson’s moonwalk, which was inspired by Marceau’s “walking against the wind”