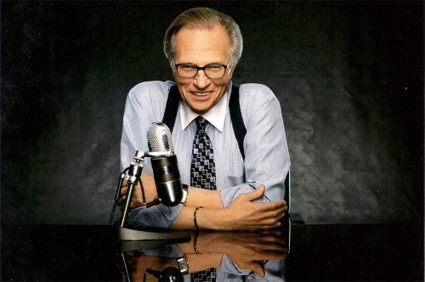 As I mentioned back in April, it was getting clear that it was time for Larry King to Retire. While I am sure that my blog entry made not a wit of difference to the old guy, I think that time and reality have finally caught up to Mr King. He announced this week that he will be retiring from his show after 25 years (about 10 years too many, many people think), and will only appear on the air for special events and whatnot.

The bad news is that, just like that persistant old person fug that must be in the air of his studio, Larry King will linger until November, effectively killing CNN in the rating for another season. Instead of being a gentleman and stepping down before the start of the new broadcast season, he will linger on, much to the delight of Faux News and MSNBC.

Replacement? Well, the one tapped at this point as likely to get the job is Piers Morgan, currently a judge on Americas Got Talent. This of course assumes that CNN will continue to run a 9PM snoozer interview show, forever damning their viewership to drop. I am personally hoping that if they go with another interview / talker show, that they push it later and stack it up against Leno and such, giving us perhaps a more news oriented talk option at 11, and allowing stars like Anderson Cooper to bring their in depth news coverage into prime time where it belongs.