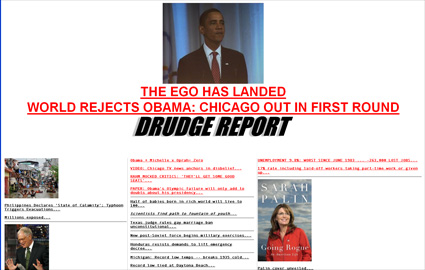 Over the last few years, much has been made about the move to “online media”, and that traditional media, from newspapers to radio to television were all doomed as the new wave on online reporters and citizen journalists would take over. Even behemoth CNN has taken to using it’s Ireport setup to take stories submitted by readers / viewers and runs them on their website and sometimes even in broadcast.

However. there are drawbacks to this revolution, and recently Matt Drudge of the Drudgereport.com has been showing why. Since the election of Obama, his site has become one of the shrillest conservative attack sites around, with no attempt made to hide the scorn or contempt that he appears to have for the entire Obama administration. The story titles vary from things like “Rahm it through” to today’s massive whopper of a lie, “World Rejects Obama”. The world did no reject Obama, the Olympic committee didn’t choose Chicago for the Olympics. On that basis, the “world” also rejected 2 other cities and thier leaders. It’s a gross distortion of reality, such an obvious attempt at Obama bashing that it is beyond shame.

All this of course on a day when one of the other most featured stories is the cover of the new Sarah Palin biography, Going Rogue. I can’t imagine that he doesn’t see the irony in that sort of layout.

Online media has a long way to go.