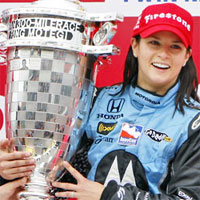 It was a long time coming, but it finally did happen. Danica Patrick, who’s arrival in the top end of American open wheel racing a couple of years ago finally won a race, taking the Indycar race in Japan on a combined fuel strategy and good racing. Many people were asking when Danica would finally win, and she has answered that with a solid win, no fluke here. As you can imagine, the buildup to the Indy500 this year is going to Danicamania to the max! When you combine this win with the merger of the Chamcpar and the IRL, and an early season win from Graham Rahal, everything is building up for this to be the bext Indy500 race in more than a decade, with more cars than starting spots, plenty of good young drivers, and some great rivalries building up.